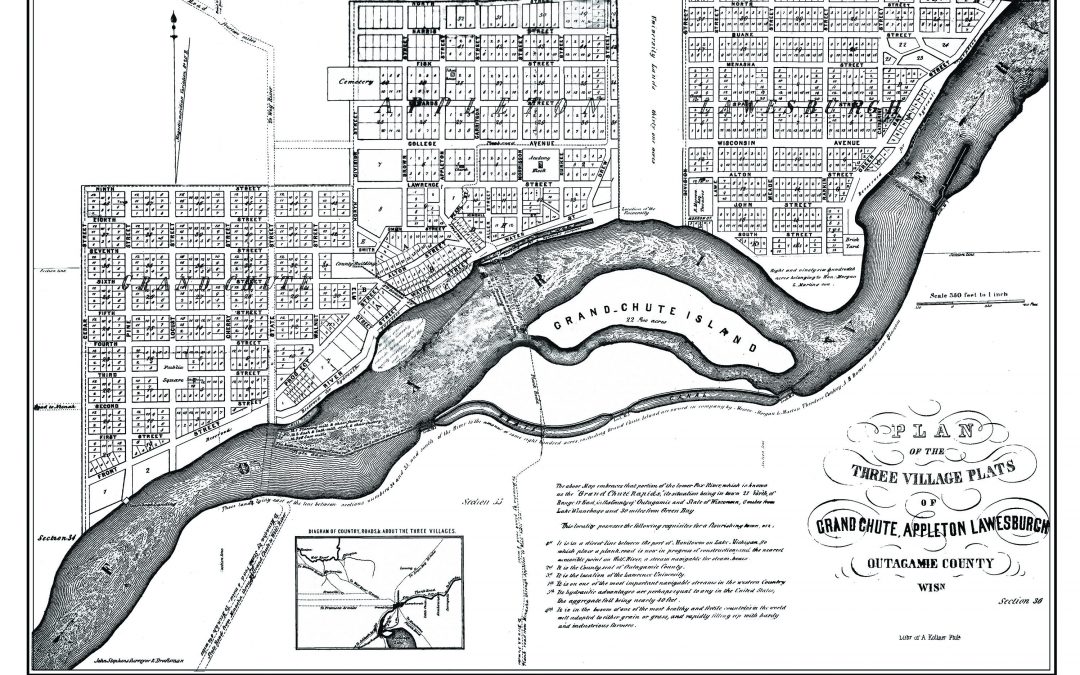 What’s In an Appleton Street Name? 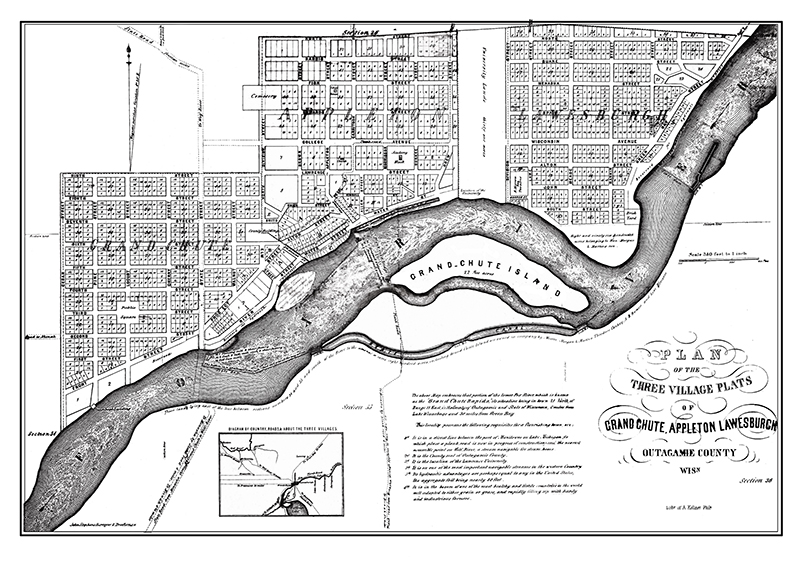 In 1846, Amos Lawrence pledged $10,000 to build a University in the woods. The first streets built in Appleton were those surrounding the original Lawrence Institute in the Appleton Plat.

In August of 1848, Reverend Sampson, Reeder Smith, Captain Henry Blood, and surveyor Joel S. Wright laid out the plat. The academy block was surrounded by College, Durkee, Morrison, and Lawrence Streets. The first streets in Appleton were named for Lawrence college donors.

The original institute building was located where the downtown YMCA is today. The 1853 map of the city of Appleton was a combination of the 3 villages: Grand Chute, Appleton, and Lawesburg. In the Appleton plat, in addition to the previously mentioned streets, the plat also included location-based street names and other Lawrence contributors and engineers. Examples include North Division, named for the boundary between the Appleton and Grand Chute plats, and South Division, named for the boundary between Appleton and Lawesburg plats.  South Division was renamed Union Street by 1857. Drew Street was named for Daniel Drew, a donor to Lawrence Institute and President of the Erie railroad.  Kimball Street was named for Reeder Smith’s wife, Eliza Pierce Kimball.

The street with the most name changes in Appleton plat was Edwards. It is likely to have been named after Nathaniel Marsh Edwards, an early surveyor. Edwards Street was changed to Adkins, for the wealthy Charles G. Adkins, a merchant who came to Appleton in 1853.  The same street saw its final name change in 1925 when it became Washington.

The Grand Chute plat was located to the West of the Appleton Plat. Grand Chute Plat was almost named Martinville, in honor of the majority land holder Judge Morgan L. Martin.  Martin, Blood, Bateman, and Warner made up the committee to plat Grand Chute. The streets in Grand Chute plat were named for trees, proximity to the river, family names, and numbers ascending from the river north. Prospect was named for the view of the river. First, Second, Third, Fourth, Fifth, Sixth, Seventh, Eighth, and Ninth are all named in order from the river.  Ninth no longer retains its name. It was changed to Lawrence after the plats were aligned. Elm, Walnut, Cherry, Locust, Pine, and Cedar were all named for trees.

The three plats were combined in 1857 when the area became officially the City of Appleton.