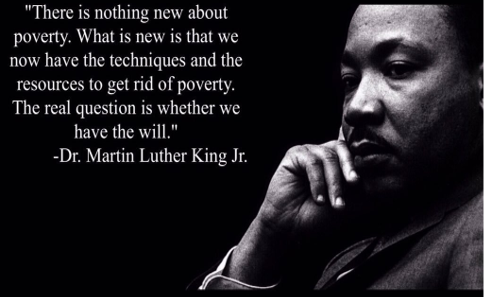 By the winter of 1968, Dr. Martin King, Jr. and his organization were embarking on one of their boldest projects yet; a Poor People’s Campaign that would bring a multiracial coalition to the nation’s capital to demand federal funding for full employment, a guaranteed annual income, anti-poverty programs, and housing for the poor. Announcing their new initiative, King said, “The Southern Christian Leadership Conference [SCLC] will lead waves of the nation’s poor and disinherited to Washington, D.C., next spring to demand redress of their grievances by the United States government and to secure at least jobs or income for all.” Before he could implement that plan, he was gunned down April 4, 1968 in Memphis.

For many people, what he said 5 years prior to his passing was the culmination of his life in their eyes. Let’s not let Dr. King’s legacy end with his now infamous 1963 “I Have a Dream” speech. He was about so much more. As powerful as that speech was, it was not the culmination of his life’s work. Far from it! Income levels for Black, Indigenous and other People of Color (BIPOC) flatlined from that day to this. It’s time we wake up from our own dream that equity has been reached. It has not! In 2021, let’s do our part to make Dr. King’s quest for income equality a reality!

Dr. Martin Luther King, Jr. and my mom were born three days apart; him January 15 and her January 18, and both would have turned 92 this month. The Kick-off to the Dignity & Respect Campaign in Appleton was purposely chosen as a CALL TO ACTION to come together in our common humanity around the issues of racism, bias, inequity, and injustice in our society. What a great way to live out the values of Dr. King here in Appleton beyond his birthday holiday.

In honor of the federal holiday this year, I would like to share Dr; King’s famous “Six Principles of Nonviolence,” based on his first book, “The Stride Toward Freedom.”

On Monday, January 18 Appleton’s two annual traditions go virtual to honor him even amid the COVID-19 pandemic:

Join us because we are BETTER TOGETHER!