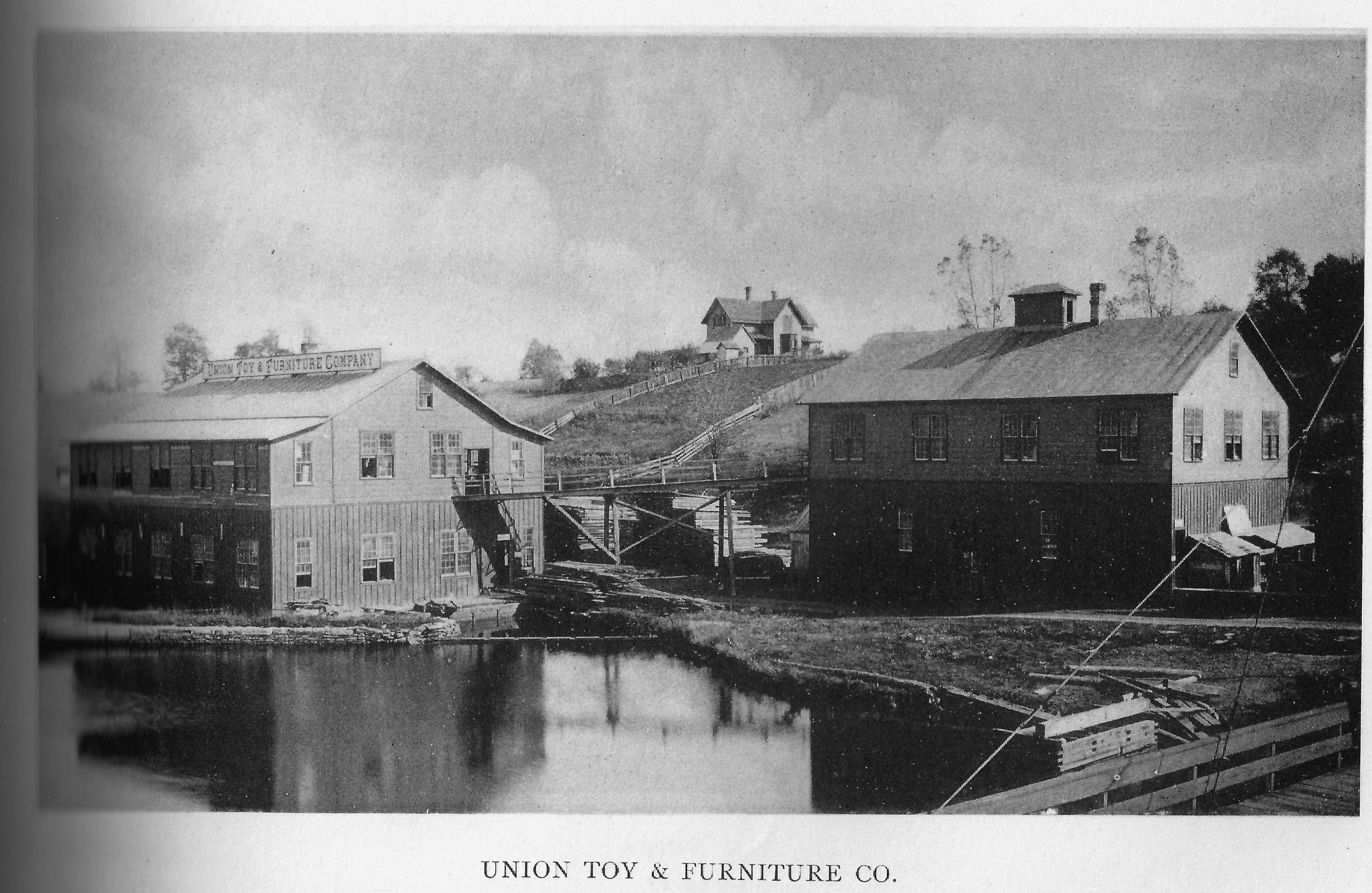 Appleton is known for the paper industry but did you know Appleton had a thriving toy manufacturing business starting in 1882?  Daniel Walters and Michael Bauer formed the first toy company in Appleton in 1882 located at South Division Street and Newberry Street (bottom of the Lawe Street hill on the south bank of the river).

The Toy factory made wagons, sleighs, wheelbarrows, buggies, and rocking horses.  Walters and Bauer expanded and even had a train sidetrack from the Milwaukee Lake Shore and Western Railway added to their property by 1884.  The toy factory designed a float for the July 4th parade in 1884 that featured a toy shop with men making real toys, the newspaper called it a “splendid reproduction of a toy shop on wheels.”

In 1886, a fire burned the original buildings of the toy factory.  In 1887, Saecker, McGill, and Ryan joined the toy company with Walters and Bauer.  At this time, they rebuilt the main two-story building 50 feet by 60 feet with a large waterwheel for power.  The storage would be further away, to lessen loss in a fire, in another two-story building 40 feet by 60 feet.  The machines salvaged from the previous fire were put into use at the new buildings.

In 1888, the toy company was renamed the Union Toy and Furniture Company.  They continued with production sending loads of toys out by train. By 1899, the toy factory made another transition to a new name, Appleton Toy and Furniture, with Julius Kahn and Phillip B. Hammel as partners.  The company employed 25 men making toys.  In 1906, the company sent out 35 full train cars of toys in six months. Production was booming.  The company added children’s chairs and more furniture to its collection.

In 1922, the company had over 80 employees producing toys sent all over the United States.  Two million feet of wood was used annually to produce the chairs and toys.  At this point they made over 500 children’s chairs a day.  The toys were sent to all the large department stores including F.A.O. Schwartz.  Similar to other businesses, they experienced a slowdown in 1930, they reported it to be a period of “timidity but not a real depression” in the toy industry.

The Appleton Toy and Furniture Company was reorganized in 1945 with a new name- the Appleton Juvenile Furniture Company.  At this point additional partners including Frederick Meythaler, who also owned playskool, joined the company.  The company made high chairs, rockers, nursery, and juvenile chairs under the trademark “Appleton Line.”

The company began making puzzles in 1955.  The company in Appleton was shuttered on November 1st 1964 and the operations moved to Hampshire, Illinois.   At the time of the closure the toy manufacturer employed 140 people in Appleton.

The dilapidated Toy factory buildings at 828 S. Lawe Street was demolished by the city of Appleton in 1968. You can see an old photo and current photo of the Union Toy and Furniture Company located in the “Now and Then Collection” display at Appleton Historical Society, along with a rocking horse built at the toy factory.