Making Something Out of Nothing 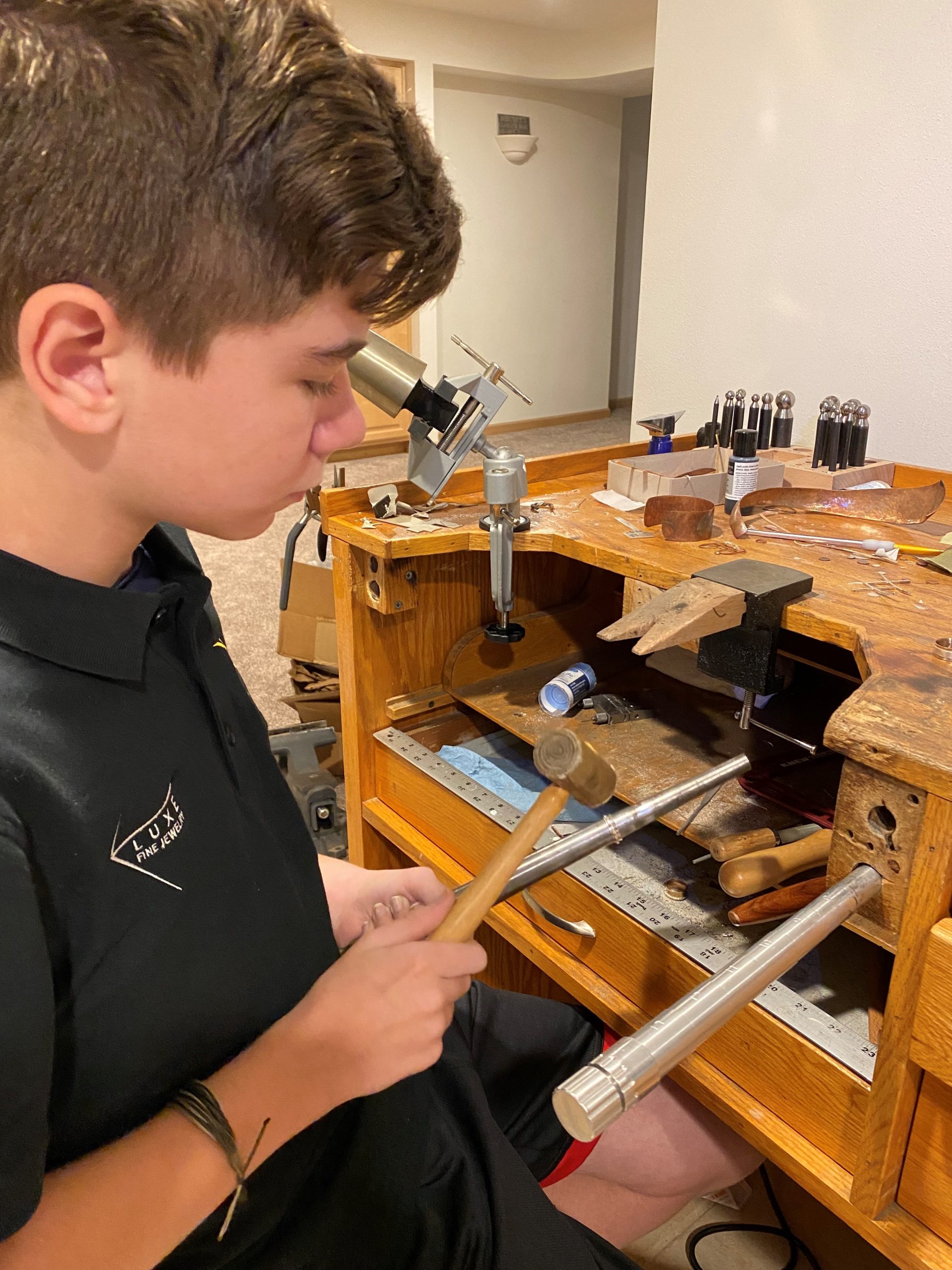 Nathan Slavens has an artistic gift for making magic out of metal.

He’s a skilled, creative artisan who can take flat pieces of precious metal and transform them into high-quality pieces of jewelry.

The fact that he’s a 13-year-old junior-high student and a self-taught craftsman makes his work even more remarkable.

Slavens, an eighth grader at Greenville Middle School, has been immersed with this hobby for less than a year, but has already sold his own jewelry at his father’s jewelry store, Luxe Fine Jewelry in Neenah.

He produces custom jewelry such as necklaces, rings, earrings, and bracelets for his father, Craig Slavens, and plans to donate future profits from his sales to charity.

“It’s been amazing to watch,” said Craig, a designer and gemologist who opened Luxe Fine Jewelry at its current address of 131 W. Wisconsin Avenue in 2018. “When he first started doing it, he would come upstairs with a piece and I’d be like, ‘That’s cool.’ But then, as he progressed, I was like, ‘Holy Cow. That’s awesome. If he wasn’t my son, I would buy it.’ And then it got to a point where we decided we could sell his jewelry in the store.”

Nathan began dabbling as a jewelry maker in January — just for the fun of it. His mother, Lezlie, started working with metals as a stress-reducing hobby in the family basement. Nathan soon joined her and the two began learning the intricacies of jewelry making, watching YouTube videos together.

Nathan works part-time in the jewelry store and Craig eventually created a metals workshop for Nathan in the building’s basement.

“It’s been so cool to watch, because Nate never took a class in this, doesn’t have any formal training, and he’s only been doing this for about six months,” Craig said.

It was Nathan’s idea to donate most of the proceeds from his future jewelry sales to charity.

“It’s been great,” said Nathan. “I just like the fact that I can take a plain sheet of metal and turn it into something that looks nice. That’s what I really enjoy — taking nothing and turning it into something.”

Nathan’s rapid development working with silver, copper, and bronze has surprised even himself.

“It started as something that was fun to do when I didn’t have anything else to do, and I kept getting better at it,” he said. “I’ve learned a lot of new things. There’s a big learning curve involved. It’s difficult and you need patience more than anything.”

Nathan is open to a potential future working with jewelry.

“We’ll see how it goes after we launch it (the jewelry line),” Nathan said. “But it’s a definite possibility. I’m very proud of what I’m doing.”